Let’s set aside whose inauguration it was, and take a moment to discuss the kind and thoughtful gesture of Melania Trump. I refer to the gift box she handed to Michelle Obama as they greeted one another.

A: Awkward. In those few moments, you could see that Michelle Obama was grateful, but puzzled. Naturally, she wanted to express her appreciation, but how could she without delaying the process.

Although thoughtful, (I mean, who wouldn’t be grateful to receive the blue gift box), it was not the right moment.

It’s similar to bringing a bouquet of flowers or a dish that requires the use of the stove to your host while the party is going on. Nice, but not practical. 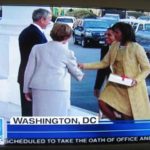 What could have Melania Trump or Michelle Obama done differently?  I must say that in a monumental moment such as the transfer of power, it was handled just fine.

Not that long ago, Michelle Obama, arrived with gift in hand as she greeted the outgoing First Lady, Laura Bush.

But Tiffany & Co. — probably most known for its signature robin’s egg blue packaging — has a long history with the White House.

President Abraham Lincoln gave a set of pearl jewelry to his wife, Mary Todd Lincoln, for his inauguration in 1861.

Tiffany also redesigned the Great Seal of the United States in 1885. Its version of the seal can be seen on the $1 bill.

And President Lyndon B. Johnson and his wife, Lady Bird Johnson, commissioned Tiffany to create their White House china.

As the anxiously awaited Inauguration Day comes to an end, I extend my gratitude to the Obama family for their service, and good wishes to the Trump family. 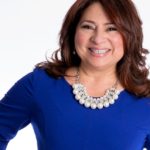