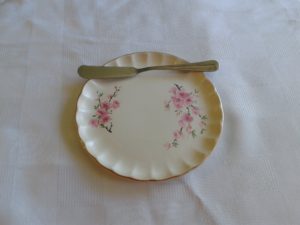 Grandma’s rules live on; well, some of them.

My guest this week is Joyce Riley.  A senior with an old-school memory.

Someone once said rules were made to be broken but, being a serious child and eager to please, I didn’t break rules.  There were, of course, major rules and minor rules, but, for the most part I honored them all and always obeyed my teachers and the school crossing guard.

At home my parents were loving, reasonable people who set reasonable rules, the first one being the Golden Rule, which was set more by example than teaching or preaching.  Other household rules were more in line with expectations.  I was expected to make my bed, clean my room (this loosely obeyed), dry the dishes (sometimes under protest), hang the laundry and gather the chickens’ eggs.  And, since Daddy worked a swing shift at the bakery, I was expected to be quiet ‘til he got up at ten in the morning.  In fact, the only household rules I recall are Mother’s rules for setting the dinner table.

“Knives and spoons go on the right side of the plate and forks on the left.  Napkins should be folded and placed next to the forks.  And, always put a butter knife beside the butter plate.”

Mother was married for twenty five years before she owned a set of flat-ware (silver plate, not sterling), which included a matching butter knife.  Matching or not, there was always a butter knife on the table, even during World War 2, when there was no butter.

Sugar, coffee, gasoline, tires and a host of other goods were rationed during the war.  Butter was not only rationed but, it seemed, unavailable.  Soon after butter disappeared from the table, oleo margerine took its place.

Oleo was white, looked like lard, but wasn’t, and came packaged with a small bag of orange food coloring.  It was my job to mix the coloring into the oleo until we had something that resembled butter.  After mixing, the oleo was shaped like butter sticks, cooled in the ice box, then served on a butter plate set with a butter knife.

Butter returned after the war was over but, by then, margarine had caught on.  It was colored and sold in sticks, just like butter. “And”, we were told, “It’s better for you.”

I married and, after starting a family, laid down some rules for our children: “Make the bed carefully, mow the lawn thoroughly, set the table properly and don’t forget the butter knife.”

Those rules were generally followed but, usually, with an, “Oh Mom, do I have to?”

Our children were a little less anxious to please than I was, but I won’t go into a dissertation on major infractions known or unknown.  After all, it’s often the little things that count, like clean underwear and butter knives.  So, I’ll get back to the knives and the butter.

The next advance in margarine (not knives) was a soft spread in tubs.  It was, obviously, easier to spread and, again, “better for you”.  But, the butter knife didn’t sit well in a tub.  That was when I broke my mother’s butter knife rule.

With a conscious, thoughtful apology to Mother, who lived hundreds of miles away, I said, “Don’t bother putting the butter knife on the table.”

Time has passed, ideas have changed and butter, it seems, is not quit as bad as it used to be.  Even if it is, I like it.  There’s nothing better than fresh corn on the cob slathered with butter. But, now, we don’t use a butter knife, we simply roll the corn over the cube, leaving a valley in the butter, which simply calls for more corn.  Mother was flexible, loved butter and would have seen the practicality of buttering corn with a cube.

Some times, now, I use butter and some times I use a spread.  But, what ever is placed on the table is served with a butter knife.

Recently, when Dave was dining with us, he said, “I remember that butter knife.” I smiled and said, “It was your grandmother’s.  She got it as an anniversary gift.”

Doing it with suavity: As society changes, so do the rules.  However, some will remain steadfast and passed down from generation to generation.  Treasure them, even if you don’t apply them every day.  It gives your family a sense of where they came from while preparing them for where they are going.

Rosalinda Randall is an Etiquette and Civility Consultant.  She provides on-site workshops for your sales team, administrative assistants, new hires, exit package, managers, high school and colleges.  She brings a modern attitude and a little humor to the age-old topic of etiquette.  For more information, please visit her web site.

Previous Poised for Success by Jacqueline Whitmore
Next Women in Advertising